The celebration got off to a good start with tartan jackets and a sculpted Chanticleer, but almost as soon as it started, it came to a halt.

The Covid-19 Pandemic made gatherings and events scheduled almost impossible and forced others to be rescheduled.

It took almost two years to complete everything involved in the celebration.

The final highlight of the year long celebration was hosting the annual meeting of the Robert Trent Jones Society moved back from its original date to the fall.

The Society was founded in 2004 with the mission “to honor Robert Trent Jones Sr. and his work, preserve the historical information and documents pertinent to golf courses he designed, and to encourage and support the education of member clubs on his principles of design.”

Greenville Country Club is a charter member of the Society.

“The Sun never sets on the Jones Empire” is a motto used by the Society to remind everyone of Jones’ impact on the sport.

During his nearly 70 year career, Jones built or rebuilt some 400 courses in 45 states in the U. S. and 35 countries worldwide.

Among his most famous designs are more than three dozen courses that have hosted majors, national and international championships including a redesign at Augusta National’s of the famous 16th hole.

The centerpiece of the year long celebration was the unveiling of a memorial near the Chanticleer golf shop.

The monument includes plaques to both Jones and his son Rees, who worked with his father during the design and construction of the course.

In addition to helping his father, Rees Jones has carried on the Jones’ association with the club offering suggestions and guidance for any changes to the course.

Twenty years ago he developed the plan to modernize the Chanticleer course and has been consulted on all design work done at the course.

Jones was the honored guest at the Society meeting at the Greenville Club. He spoke to representatives of member clubs and enjoyed visiting the course he worked on with his father 50 years ago.

“This course is an old friend,” said Jones. “I was here with my dad 50 years ago. We walked this land when it was just raw land, completely wooded,” he said.

The Chanticleer location was one of many the club and Jones’ father considered before deciding on the current location, a short distance from the Greenville club’s Riverside course.

“We looked at a lot of different sites, but this was just ideal for golf. The streams, the topography and the green sites, I think that is why it turned out to be such a great place to play golf and that is why it is so highly rated in the top 100 in golf magazines,” said Jones.

Jones memories of the development of Chanticleer included the differing opinions on the name.

“I remember there were a couple Clemson men on the board and they didn’t want the course named after the South Carolina mascot. It took some effort, but they got it worked out,” he recalled.

While many of the newer, very expensive golf courses have moved in front of Chanticleer in some recent course rankings, Jones believes the features that made Chanticleer a top ranked course are still very much in evidence 50 years after its opening.

“It is an old style minimalist golf course. It is a natural golf course and didn’t cost much to build,” recalled Jones.

The land for the course was given to the club and much of the construction work was also contributed.

When the course needed a refreshing, Jones came back to the club.

“When I revamped it 20 years ago I brought the construction standards up to date, transformed a lot of the holes and made the green contours much like Augusta National, more suitable for higher speeds and the players love playing here,” he said.

Whenever there is an event scheduled by the SCGA or CGA at Chanticleer the field is always full.

Over 50 members of the Robert Trent Jones Society were in Greenville for the annual meeting in November.

Society members from all over the country attended the meeting and after playing the course it was easy to hear the Society members making the same assessment of the course as Jones himself had done after visiting his “old friend.”.

Hear from Rees Jones about his memories of the construction of Chanticleer and the current and future state of golf course design and construction.

The Golf Club newspaper published the story of the unveiling of the Chanticleer Monument and some of the history of the course on its 50th an anniversary in October of 2020. 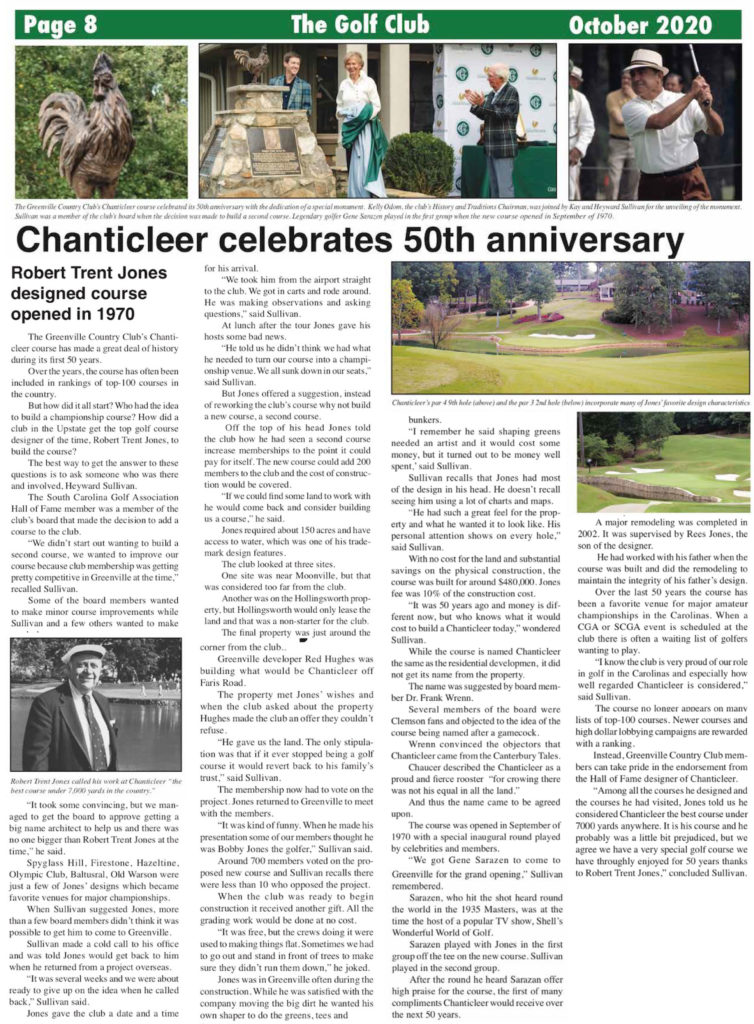